Notable riders were awarded unique white rainbow jerseys for their outstanding contribution to the success of Ian Brown’s Cycle Shop 30 Rides in 30 Days Challenge as follows: –

Ian took part in 2008 and really set the benchmark for future years. Ian raised over £7,000 that year and this included £1,800 on the penultimate day by riding 30 times up the Val des Terres non stop in just three hours. A truly amazing feat and one which saw the public willingly throw small change and even pound notes into collectors’ buckets.

Karen’s first 30/30 was 2009 but also took part in 2010. The fundraising in those days was very challenging due to the global financial crisis at the time. However in 2011 Karen had the brilliant idea of involving her school Beechwood into her fundraising efforts to remarkable effect and the Beechwood 30/30 Cycling Fun Day of that year raised £2,300. Now the Elizabeth College Junior School 30/30 Fundraising Day is a fixed event in their calendar and since 2011 over £20,000 has been raised by this one school. Carrie, Debbie, Liz and Sally now run things now Karen has left the school but the whole school is fully behind them and the results show.

Nigel has taken part in all ten of the 30/30 challenges and so is unique in owning one of each of the ten coloured jerseys. Each year he has surpassed the fundraising target. His total raised so far exceeds £11,500.

Andrea’s first year was 2010 but what separates Andrea from other 30/30 riders is the extreme challenges she has set herself over the years. Not content with riding her bike for 60 minutes each day as she did in 2010 she increased the rides to 30 miles each day in 2011 and in 2012 increased this to completing 30 triathlons in 30 days including a 3 mile run and 30 lengths of the swimming pool to her 30 mile cycle ride. Not content with these physical efforts she has also held 30/30 themed BBQs at home and held colour co-ordinated days at Frossard House. Even the States of Deliberation were encouraged to wear something pink for the states sitting in May of 2011 or else pay a forfeit. Her supporters and sponsors have recognised these efforts and her total fundraising 2010-16 exceeds £9,000. Andrea, with fellow 30/30 Riders Tim Loveridge, Mark Torode and Richard Freeman, AKA “The Pootlelists”, also organised the 500 mile Les Bourgs to Les Bourgs ride from The Alps in 2017 and raised a further £10,000.

Richard has taken part every year since 2012. He has always reached or exceeded his target for fundraising and received cash matching from his employers Lloyds Bank International. Some years Richard has encouraged some fellow employees to join in the challenge and in 2017 was joined by Issie and Maisie his two daughters.

Steve took part in the very first 30 Rides in 30 Days Challenge in 2008 and a further ten more since. Steve has organised music nights and race nights as well as many static bike rides to reach his target for fundraising for Les Bourgs. 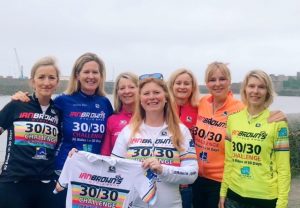 Nathalie took part in 2011 and 2012 with husband Jim and in 2013 she was part of a combination team of four ladies known as Creme Anglaise, two French Sandrine Harris and Nathalie and two English Jo Huxtable and Jani Burwood. Every year since 2013 Creme Anglaise have registered for 30/30 and smashed their fundraising target. Cumulatively they have raised towards £50k for Les Bourgs. Other riders, Dr Jenny Turner, Sophie Fowler, Jane England and Nicola Walker have also ridden with Creme Anglaise.

Simon first took part in 2011 and also in 2012 as an individual, After a few years he took part with his family, wife Sarah and Vicky and Sam daughter and son. He has also formed teams of fellow workers from Specsavers and in 2021 rode with brother Tim and Paul plus his nephew James.